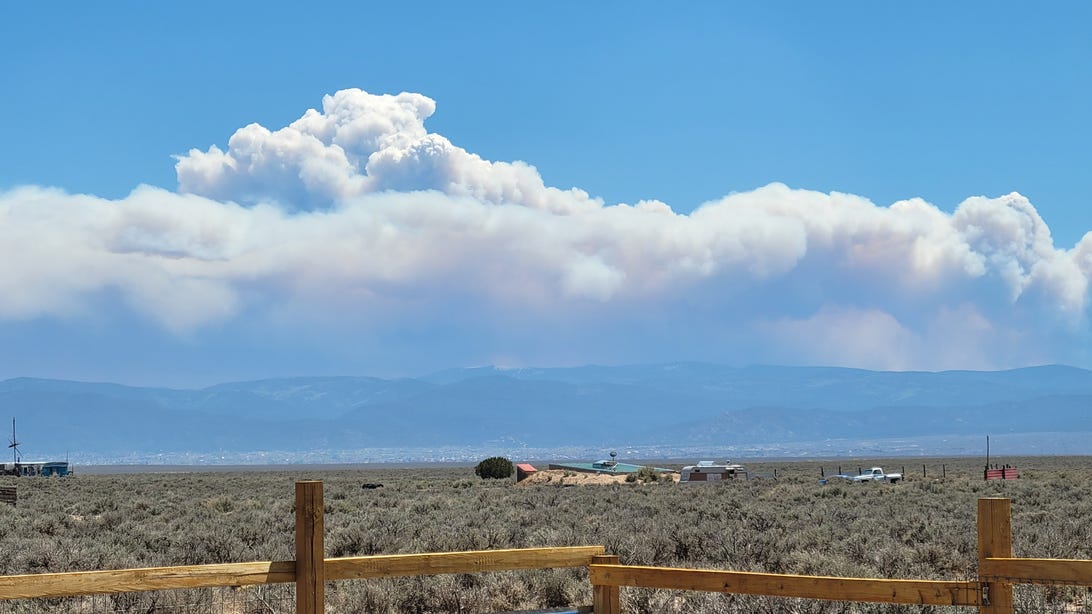 Extreme wind, warmth and dry conditions are driving large wildfires in the Southwest US with no sign of relief in the weather forecast.

Observers expect more hot, dry, windy weather and potential evacuations for resort communities near the town of Taos and the scientific mecca of Los Alamos.

Wildfires in the American Southwest over the last several weeks have destroyed more than a hundred homes and small businesses, forced the evacuation of an impoverished mountain valley, and now threaten two ski resorts and the city of Los Alamos, New Mexico, home to the sprawling national lab complex that was a key site in the birth of the Atomic Age.

The majority of the destruction so far has come in New Mexico, and well before the typical peak of the wildfire season in the Western US.

The scenes that have played out in the Southwest are similar to last year’s catastrophic fires in California, Oregon, British Columbia and elsewhere. This year, unrelenting winds, drought and unseasonable warmth have settled primarily on Arizona, New Mexico and north Texas. More than half a million acres have already burned across the three states, with 60% of that acreage torched via three major infernos burning in the rugged, forested mountains and valleys north of Santa Fe, New Mexico.

Over 16,000 homes, primarily near the city of Las Vegas, New Mexico, and that state’s isolated Mora Valley, have been evacuated, with more than 40,000 people directly affected by the merged Calf Canyon and Hermit’s Peak fires, which have torched a total of over 260,000 acres as of Thursday. At least 166 structures, including some homes, are known to have burned so far, New Mexico Gov. Michelle Lujan Grisham said on Tuesday. There are no reports of lives lost due to the fire, but one firefighter was injured by a falling tree.

This week, strong, sustained winds drove the flames to the north, creating huge plumes of smoke that were visible from over a hundred miles away. The ski resort areas of Angel Fire and Sipapu are being prepared for potential evacuation and the Carson National Forest Camino Real District that includes the popular South Boundary Trail outside of Taos has been closed to the public as of Thursday morning.

The fire is currently the largest burning in the US, the second largest ever in New Mexico history and has already burned more acres than all fires combined in 2021 in the state.

Meanwhile, the smaller Cerro Pelado fire is burning in the Jemez Mountains, placing the entire county of Los Alamos, including Los Alamos National Labs, on high alert to be prepared to evacuate at a moment’s notice. Part of the fire is actually working its way through the burn scar of the 2011 Las Conchas fire, which also threatened the community and lab.

Thousands of firefighters from across the country are working to contain the fires, but the weather forecast offers little hope for relief, and officials are bracing for a historic battle that could last well into June or whenever seasonal monsoon moisture finally arrives.

How many fires are there?

Six major fires are currently burning in New Mexico alone, with much of the acreage and focus currently tied to the aforementioned blazes.

Not counted among those fires is a grass fire that started Monday near the New Mexico town of Santa Rosa. The wind-whipped fire led to the temporary closure of Interstate 40. The fire burned through an estimated 60 acres before it was brought under control and the highway reopened.

The San Rafael Fire has burned more than 11,000 acres near Arizona’s border with Mexico, and at least two smaller fires are also being attended in Texas.

The McBride Fire also started in April and burned about 6,000 acres around the southern New Mexico resort town of Ruidoso, claiming the lives of two people as well as over 200 homes. That fire is now 100% contained.

How did these fires start?

The Hermit’s Peak Fire started on April 6 when a prescribed burn being conducted by the Santa Fe National Forest spread outside of the planned burn area due to what the US Forest Service called “erratic winds.”

Public records disclosures revealed that the Santa Fe National Forest team that ignited the burn reviewed a weather forecast that predicted low humidity and winds gusting up to 25 miles per hour for the day that the burn started. The agency says it will conduct a comprehensive internal review of the incident.

What’s the connection between the fires and climate change?

Myriad studies point to a connection between human-caused climate change and an increase in heat and drought across the western US that can’t be said to cause wildfires, but does make them worse or more likely to occur.

According to NASA, the West isn’t just experiencing more frequent wildfires, but “they’re also happening at the same time, putting a strain on resources. They’re also bigger, more severe, and faster than ever before, and more destructive.”

Scientists have also determined that the Southwest, in particular, is in the grips of a historic megadrought brought on by climate change.

One major factor in the current outbreak of wildfires that’s not clearly connected to climate change is the persistent and extreme winds that have plagued the region for months. At one point during extreme gusty winds, the Hermit’s Peak-Calf Canyon fire was advancing at a mile per minute.

The weather report in northern New Mexico over the past month has seen a red flag (severe winds) warning on all but just a few days. Those not dealing with flames or smoke from the fires have occasionally had to contend with dangerous dust storms in the largely treeless lowlands. It’s all a bit overwhelmingly apocalyptic.

Some residents of areas near Las Vegas, New Mexico, have already been allowed to return to their homes as firefighting crews have managed to contain the blaze and winds have shifted.

Meanwhile, new evacuations have been issued along the more rural and remote northern edge of the Hermit’s Peak-Calf Canyon complex.

Grisham acknowledged that many residents prefer to stay behind to watch over property and livestock.

“That’s risky for any number of reasons,” the New Mexico governor said in a press conference Tuesday, encouraging everyone to obey mandatory evacuation orders. “These fires move extremely fast.”

The weather forecast for much of the Southwest calls for more heat, wind and dryness for the next 10 days, if not longer. Monsoon rains tend to arrive in mid- to late June, and officials are hunkering down for what’s shaping up to be a historic battle with one of nature’s most fearsome elements in the meantime.

To support people impacted by the wildfires, please visit All Together New Mexico.

How to invite someone to a Zoom meeting | Digital Trends